Is the Blackmagic Pocket Camera Up to the Task?

5 Questions for Captain Hook, The Man Behind the Latest Sample BMPC Footage 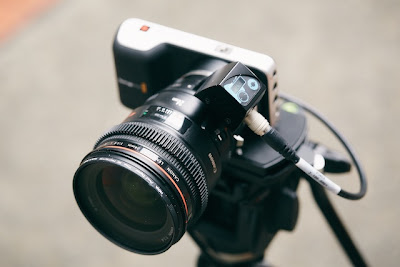 As the Blackmagic Pocket Camera begins shipping, filmmakers anxiously await real-world feedback and reactions. Although the early BMPC footage gave viewers an idea on how the camera footage looks, does it meet the expectations?

We spoke with Captain Hook, who shot and posted recent footage of the Pocket Camera (see end of article for video), and asked him five questions about his hands-on experience with the camera:

Redrock Micro: Does the BMPC live up to the hype?

YES! My perspective is somewhat distorted by being familiar with the BMCC 2.5K EF mount (which I've had since January this year) and having done a lot of reading and research about the Blackmagic Cameras in general, so I had a very good idea of what to expect in terms of firmware, features, and image. This time around, I got to not only grade the very first footage posted by John Brawley (who's incredibly talented and generous with his time/knowledge) from the Pocket Camera but to also get my own unit to beta test following that. I was really floored by the image and color, and that might seem strange having used the 2.5K version, but I'm still enamoured with that camera also. Both of these cameras cost less than our 2 Canon 5D3's we use for stills, it's just incredible. There will be a shock for some who don't know much about the BMD line of cameras currently, both good and bad. Missing firmware features like audio meters, in-camera formatting, remaining disc/record time, custom LUTs, etc, get requested often - but if you do your research prior and understand what you need to get going with these cameras then that stuff can be dealt with.


RRM: Now that you've had a chance to use it, have your thoughts changed for how you intend on using it? If so how?

Initially, I thought it would make a good B-cam to my 2.5K EF, but I didn't anticipate how often I would find myself taking it out with me just to 'capture footage' of what we may be doing. Being so portable, it really lends itself to that and really doesn't draw attention to itself. Or, you can choose to rig it up for a more 'production' type environment with all the bells and whistles if that's what you're doing. I guess I didn't realize how often I would actually take it out with me and use it, especially in situations where the BMCC is too big and cumbersome or just plain overkill. 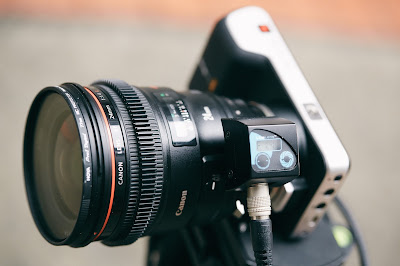 RRM: How do you find yourself dealing with the nearly 3x crop factor?

I've gotten used to "translating in my head" what our lenses do from the EF mount, so I know what our lens set does equivalent to the same lenses on a 35mm full frame like the 5D3's or S35 sized sensor. The Pocket is multiplied by a higher amount, but it's just another conversion in your head to get used to. It helps to have wide, fast glass. We have a 14/2.8L, but I wish it was faster. The SLRMagic 12/1.6 interests me but I would get the MFT 2.5K first so I could use it on that too. The reality is though that 35mm full frame is generally my widest lens except for "special" shots. I personally don't really have much of a desire for anything wider than 12-14mm for these cameras. I do wish the Canon 85/1.2L worked on either the BMCC EF mount or the Redrock LiveLens adapter though.


RRM: What are your three favorite and least favorite things about the Pocket Camera?

• The image (including the colour science and decent codec - 422HQ)
• Form factor (feels great in the hands when stripped down)
• Stealth and portability factor.
• Price! (oops, that's 4)

• Battery Life (I think external power is the best solution for me)
• Some missing firmware features I would like (in-camera format, customs LUTs, audio meters, disc remaining)
• Micro HDMI (HDMI is fragile enough, but clean HDMI to my Hyperdeck Shuttle makes up for it and allows me to record a lot of footage at 10bit 422HQ but at the cost of bigger 'footprint')

I think it's important for people to spend the time to research and read about these cameras on the various forums like Blackmagic Designs's own forum, and BMCuser.com. There's very knowledgable and helpful people on those sites that can give you insight not just into these cameras, but filmmaking in general. People like (again) John Brawley, Kholi Hicks, and Frank Glencairn. Armed with the right knowledge and expectations, I think this camera will make people very happy. 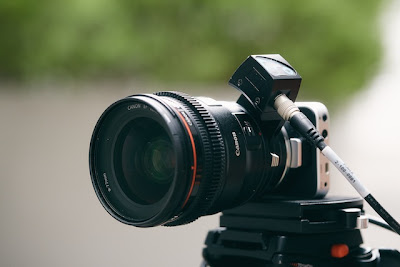 RRM: You use the Redrock liveLens MFT to adapt Canon L series glass. How do those lenses perform on the BMPC?

I've been really happy with the image quality from the Canon L glass, and I love that I can use them on my Blackmagic cameras, saving us from purchasing all new glass. I definitely have my eye on dedicated cinema glass for the future, but it also makes a lot of sense to hire lenses like that for jobs that need it. Because of that, I plan to eventually get the MFT 2.5K version so I can again still use the Canon L glass with the Redrock LiveLens adapter, but also get other adapters for PL mount and Nikon, etc. Pulling focus is obviously the big issue, but I've gotten a pretty good feel for pulling my own focus now with the lenses we have. A follow focus with hard stops is helpful, but I'm also eyeing up the Redrock microRemote with the Handheld Controller for AC's and fingerwheel as I like that you can remap the focus range etc.


Check out the Redrock LiveLens MFT, which allows Canon EF lenses to be used with the Pocket Camera and be able to adjust the lens’ aperture, after the jump.

Special thanks to Captain Hook for his contribution to this article, you can learn more about his work at http://acoupleofnightowls.com.

Are you buying a Blackmagic Pocket Camera? Do you intend to use it for production purposes or as a point and shoot camera? Let us know below!