Getting Furious with DSLRs and Mad Max


How they really used DSLRs and Redrock Rigs on Mad Mad: Fury Road

In summer of 2012 Redrock was contacted by a South African production company who wanted to outfit some 5D MK IIs for a feature film. They mentioned Mad Max.


Mad Max, as in "Mel Gibson Mad Max"? We knew the original franchise well, some of our favorite movies! But it had been twenty vie years since Beyond Thunderdome, and even longer since the original Road Warrior. TWENTY FIVE years, that's a quarter century!

16 Years in the Making

Was this a fan film, a documentary, or possibly an homage? Turns out, they were serious about rebooting the franchise, and we were all treated to the awesome thrill ride that came to be Mad Max Fury Road. (It also turns out this movie was in planning stages as early as 1999. But that is another story)

The Furious (Re)Birth of Mad Max

Fast forward to 2015, as behind the scenes clips and videos started to leak online, we started to get some insights into how DSLRs were incorporated into high end feature film production, including the Redrock gear used to rig them (check out the Fury Rig details at the end of this post).

In context of the movie, the action itself was in many ways the real star of the film, and you might consider the plethora of deadly cars the ‘lead actors’. Shooting this kind of unrelenting action required constant and varied close up action scenes.

Looking at the types of shots they needed to achieve, close up and pov action was a big part of the thrill ride. DSLRs are often dismissed as legitimate filmmaking tools, but in the right circumstances and in the right hands, they can really serve a story at any production level. (Other major feature films that have used DSLRs include The Avengers and Iron Man among others)

Insights on How DSLRs Were Outfitted, Rigged, and (ab)Used

Studying the behind-the-scenes pictures and videos of the DSLR operators, and applying a little production and rigging knowledge, here’s what we can surmise. Keep in mind production started some years ago, approximately 2012, so things have certainly changed since then, and the crew would almost certainly have made different choices if shot today. 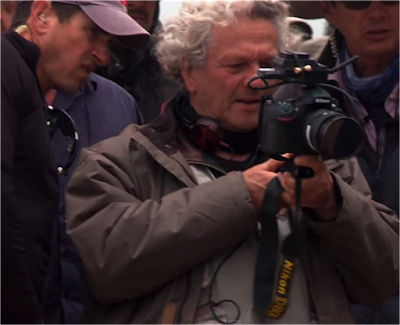 The rigs were designed to be super lightweight, focus heavily on grip placement and customizability, and included the microBrace bodypad for added stability. The microBrace was also used as a forearm stabilizer when rotated 90 degrees and placed on top of arm.

We’re hoping to get additional details from the production crew, so stay tuned!
Other articles and sources mentioned or quoted:


UPDATE: since the release of the movie and huge number of questions we’ve received, Redrock has announced availability of the Fury Rig, the rig inspired by Mad Max Fury Road and the rigs used, and now updated for use with DSLRs, Canon EOS Cinema cameras, and Blackmagic Cinema Cameras.

You can find more details and configure your rig here:

UPDATE 2: there is a great and not well known "making of mad max: fury road" presentation at the ACS with John Seale and David Burr. Highlights on the DSLR side of things (details on the DSLRs starting around 26:30).

Watch the whole thing, it's a great presentation of the whole film and brilliant commentary on the production and camerawork.
Posted by Unknown at 9:39 AM